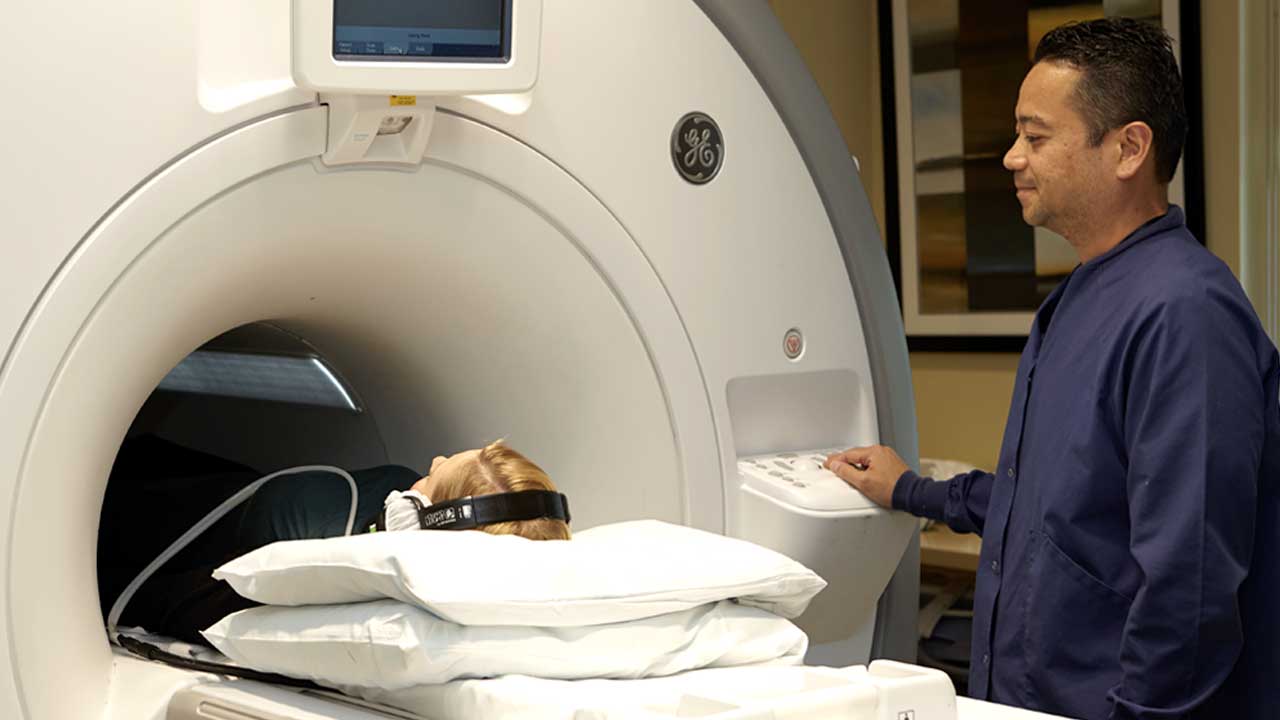 MR has long held the notorious distinction of being one of the less comfortable medical imaging exams. From the noise to the exam length, to the cramped quarters and the need for contrast, there are plenty of things for patients to dislike about the experience. Fortunately, as providers turn their attention increasingly toward patient satisfaction, some of the unpleasant aspects of a visit to the MR suite are being scrutinized and chipped away. Visual and audio equipment, open MR scanners and noise reduction software are all important components of patient comfort, but when it comes to the human touch, there is no substitute for a good technologist.

“We sell equipment that helps the patient and technologist but it’s really about the interface between the technologist and the patient,” said Paul Bullwinkel. President of Avotec, a company that specializes in MR accessories. “That is going to set the tone for how the exam is going to go.” Even an MR suite that has Tested in patient comfort tools, such as headphones for music or patient communication, needs to have technologists on staff who will take the time to provide them to the patient According to Bullwinkel, a “low-end” technologist might be in too much of a hurry to bother with the headphones, which could back-fire on thermionic an uncomfortable patient may prolong the exam.

MR sites typically run on very tight schedules and it’s the responsibility of the technologists to ensure the exams are running on time. If they fail to do so, it could have a negative effect on the facility’s bottom line. “If it’s outcome-based, they are only going to pay you for doing the scan once,” said Thomas Lie Orndahl, Vice President of Sales and Marketing for NordicNeuroLab AS, a company specializing in enhancement tools for advanced scans like fMR1, “If it takes you extended time or three or four times, then you pay for it. You can’t bill the insurance company because it didn’t work the fist time.”

Those concerns come into play when a facility has technologists who are in a rush or, for example, require 20 or 30 minutes to persuade a child to lie on the scanner bed. “If a site is truly to deliver patient comfort, the personnel interacting with the patient need to be skilled at making the patient feel at ease,” Lie Omdahl added. It is important that MR technologists have received the necessary training to deal with patients from all age groups. However, more work needs to be done to ensure they receive that training. Colleagues of Bullwinkel divulged to him that technologists receive very little to almost no training on helping patients cope with the noise that MR scanners make. “The proper insertion of ear plugs is critical, and I don’t think people really get any training about that,” said Bullwinkel. “it’s typically handed to the patient to do, and how many people have used an earplug before? If you are not doing it correctly then you are not getting the noise reduction you should.”

Even the best technologist will be glad to have audio and visual equipment on hand to help calm and comfort anxious patients. These tools provide them with entertaining videos that ease them into the MR scanner and distract them from the exam. NordicNeuroLab’s nordicComfortSolution package consists of the company’s 40-inch ultrahigh definition InroomVewingDevice and the nordicComfortPlayer, which the technologist uses to select video and audio files for the patient. Avotect Silent Vision solution is slightly different, in that it uses projectors to display the visual presentation.

Another company at the forefront of addressing patient satisfaction in the MR suite is MRlaudio. which offers an array of headphone solutions for patients to enjoy music during the scan experience. Despite the differences. all of these solutions share the same goal of enhancing comfort and eliminating the need for sedation or general anesthesia. which can add new types of uncertainty to the scan process.

“From a provider point of view you have a patient who has taken drugs and you are going to put them in a scanner and you’re not sitting right by their side,” said Bullwinkel. “The provider doesn’t know whether the patient took one or two pills and they can’t monitor what is going on. Sedation is also not practical from a business standpoint. A 2010 study conducted by the Hospital for Sick Children in Toronto found that sedation increases MR costs by as much as 300 percent. General anesthesia is an even more expensive option. “Very often we see that general anesthesia is being used on the younger patient groups. At many sites, this is the protocol for children aged 16 and younger.” said Lie Omdahl. “General anesthesia adds risk to the patient and is costly for the hospital as it requires more time and resources to administer.”

Aside from safety, an important difference between patient comfort technologies and sedation or general anesthesia is that the patients are familiar with audio and video stimulation. These distractions recall regular everyday experiences. which can be sorely lacking in the medical setting. “One of our customers reported that [when they performed] MR heart exams lasting over one hour on children, they had problems getting the kids out after the scan because the movie hadn’t finished,” Lie Omdahl added. These kinds of tools have led providers to report reductions in aborted scans and less motion distortion on images. both of which contribute to efficiency and better outcomes. It also doesn’t hurt that technologists usually find these resources make their working day much easier.

The FDA recently deemed MR audio equipment class II medical devices, which means they require regulatory approval. Spencer Howe. the President and CEO of MRlaudo. stressed the importance of providers ensuring the equipment has that approval before a purchase is made. “The FDA considers an MR patient stereo a medical device because it touches the patient,” said Howe. “For the customers it is a huge liability if they are buying something that is not kosher.” He explained that a lot of companies are flying below the radar since their MR audio equipment is not registered as a medical device.

They will eventually get into trouble. but in the meantime customers need to protect themselves. No matter which company a facility chooses. Howe recommended they call a couple of customers to find out if they like the equipment. On their own website, MRlaudo boasts nearly two dozen happy testimonials from a wide range of customers, including Mayo Clinic and the University of Wisconsin. “I think what people will find is that there is only a handful of decent systems out there – the rest of them are a joke,” he added.

The noise associated with an MR exam is probably the single most highlighted aspect of patient discomfort, leading to communication problems during the scan, as well as difficulties with sedation and even hearing impairment. While audiovisual stimulation is an excellent method for obscuring the acoustic clatter of the magnet, scanner manufacturers are finding their own ways to quiet things down. GE Healthcare’s Silent Scan technology brings MR scanner none near background sound levels by minimizing changes in the current during the exam. In a 2014 study published in Diagnostic and Interventional Radiology, researchers had 10 patients undergo routine brain MR with a 3T system and 12-channel headcoil. T-1 weighted gradient echo and GE’s Silent Scan’s Silenz data acquisition method were performed, and patients were asked to rate the sound impression for both. The researchers found that the mean noise level was significantly reduced with the Silent sequence – 34.3 percent reduction in sound intensity and a 99.97 percent reduction in sound pressure. There was also no notable difference between Silenz sound levels and the background none in the scanner room.

Siemens Healthineers has noise reduction technologies on all of its MAGNETOM MR scanners and also offers its Quiet Suite for neurology and orthopedic MR exams that reduces sound pressure up to 97 percent. Philips Healthcare reduces noise up to 80 percent with its Comfortone scan techniques, which are available for routine MR exams including brain, spine and musculoskeletal.

The small space inside the MR scanner is also a major source of discomfort for patients. Even if a patient doesn’t suffer from claustrophobia in a clinical sense, being submerged in an MR bore can still trigger those anxious trapped feelings. Alleviating claustrophobia, as well as meeting the needs of an increasingly larger patient population, led Lutheran Hospital of Indiana to install Hitachi Healthcare Americas’ Oasis 1.2T open MR system. “One in five people we deal with are claustrophobic and if you have an open offer, they are wiling to go ahead and do it without needing sedation,” said Nate Souther, MR coordinator at the hospital. “We got lots of positive feedback about patients being more comfortable in the magnet.” The Oasis, which they use for in-patient as well as out-patient cases, has improved hospital throughput and increased their capabilities for scans per day.

Audio and visual equipment can do a lot to alleviate the patient’s anxiety but if a facility wants to go the extra mile, they can hire a company that turns the MR suites into a fantasy themed room. With the right artwork and lighting, these rooms can create the illusion that the patient is at the beach or traveling through space. Dream Think Imagine (DTI) is one of the companies that specializes in creating these themed environments. Since it was founded in 2002, it has successfully constructed 13 rooms, with clients ranging from Boston Children’s Hospital to Stanford Children’s Health Lucile Packard Children’s Hospital.

The company’s portfolio includes vinyl wall coverings, gantry skins. 3D sculptures that surround the imaging modality, ambient lighting, virtual skylight windows and interactive projections. “The beach theme was just perfect to create a relaxing environment,” Dr Rob Goodman of Yale-New Haven Hospital said in a testimonial on DTI’s website. “It is something children look forward to, going to the beach. We really did push tie envelope to make the MR scanner look like a sand castle.”

Hit enter to search or ESC to close